10 Ways we made The Global Mobile App Summit and Awards Successful on Social Media! 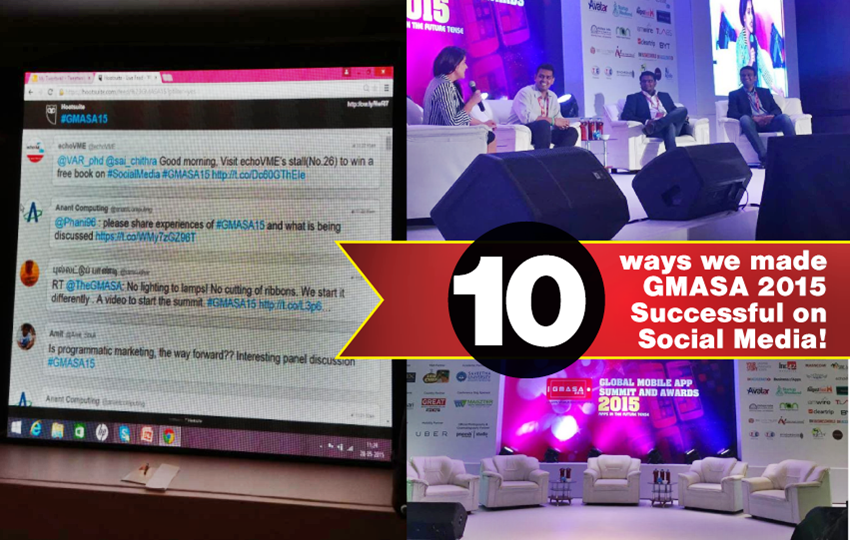 Any major event we experience, whether it’s the IPL Match or a Marketing Summit, is incomplete without its social media updates and hashtag. And live updates are as good as watching the live broadcast. At the Global Mobile App Summit and Awards 2015, we at echoVME carried out their social media activities in style as we were proud Social Media partners!

The Global Mobile App Summit and Awards was held at ITC Grand Chola, Chennai on the 28th and 29th of May and brought together 50+ recognisable Mobile App gurus, marketers and developers from around the world to share their gyaan on the fast growing mobile app industry. Yet perhaps the most surprising part of the conference was that competitors like Uber and Ola Cabs were parked on the same stage for a panel discussion! Here’s how we made GMASA 2015 create a live buzz online and kept their momentum going!

A lot has to go on the pre-event planning. Hence we came up with an amazing concept:

To create a social media identity for the event we ideated the hashtag #GMASA15 so that participants can tweet with the hashtag & promote the event! The hashtag was used extensively on every tweet that was made & on the Facebook posts. The official hashtag was later announced on fb, twitter as well with the objective of keeping the hashtag trending on the day of the event and made an announcement about it on social media platforms (Facebook, Twitter) All the updates about the event had the #GMASA15

The primary method to promote a global event is done on Facebook. Our daily posts included engagement posts which enabled us to interact with the audience. People were asked certain questions about the speakers attending the event and the company they worked for/owned. Updates on the agenda of the event were also made and actively promoted.

GMASA invited the best speakers from every field. Heads, marketing managers and app developers from the reputed Uber, OLA, Reliance, Google, Microsoft, Sony, IBM were invited to be under one roof. Posts about every speaker was made and posted after which they were retargeted to the GMASA website visitors.

We tweeted to people based on their interest in technology and the mobile app industry to personally invite them to be a part of #GMASA15.

We mapped the speakers and tweeted to them, mentioning their Twitter handles and the hashtag, announcing that GMASA was glad to have them at #GMASA15 and are looking forward to their talk. The topics of their talk were also mentioned to educate the audience.

To attract audience to earn their entry to the global event, we ran an interesting contest on Facebook to give a couple of lucky draw winners. “One App you would want to be if you were given a chance?” was the question of the contest. People who participated in the contest where given 4 free rides from Uber and a free entry pass for both the days! We also created an event page for GMASA 2015 and invited people according to similar interests.

Here’s a list of our activities during the event:

We had our Social Media Executive team attend the two-day event and covered it entirely by live tweeting about the speakers, award ceremony and posting images from the event immediately with the hashtag #GMASA2015. For extra buzz and interaction we also set up a live ‘Twitter Wall’ at the event!

For the ‘Best Selfie’ contest audience were asked to take a selfie standing against any GMASA property (with the logo). We received a good amount of selfies, but there had to be one winner, which was Raman Anurag!

Fill in the blanks: Life Without Facebook And WhatsApp would be….

Fill in the blanks contests are the epitome of fun! Yes, we all know life without Facebook and WhatsApp would be miserable but what could be the most creative answer? We got a lot of creative answers for this one but there was one, which stood out from the list. Good one right?

This contest was to choose a winner who tweeted first with the hashtag #GMASA15. Sounds simple right? But not when you have a lot of people competing to bag the prize! Mr. Abishek Muthian was the first one to appear on the tweet wall. This did help create a lot of buzz!

In order to increase the tweeting activity on Twitter, a contest was held for the most active tweeters at #GMASA15

A lot of work went into organising GMASA2015! We made sure to give our Facebook fans a pre event glimpse and posting images taking them through the two days!

An whooping 2328 tweets in total were made for GMASA 2015 with 495 total contributors for the tweets and 320 photos amongst them!

Do you want to make more noise about your event on Social Media and reach out to a bigger group of quality audience? Write to bde@echovme.com!

This blog post was written by Social Media Executives Rishika and Payal with the guidance of Team Leader, Amrutha.