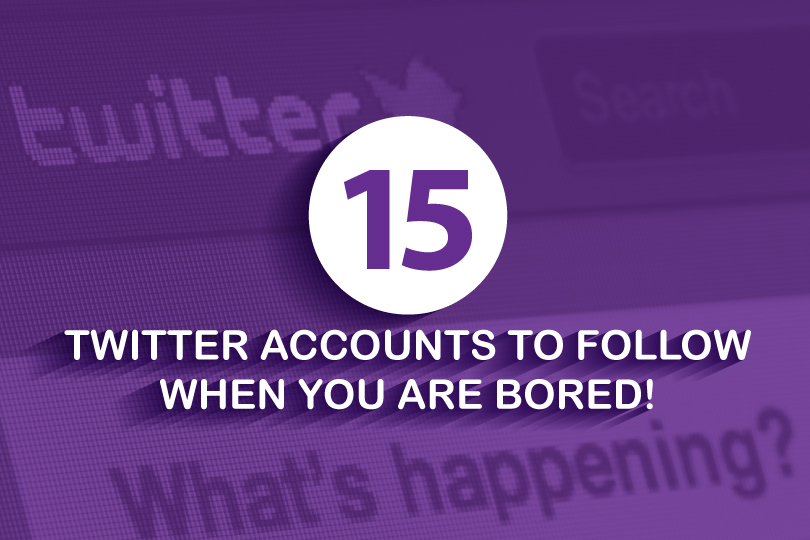 Following a good Twitter account is no less than being plugged to an awesome internet outlet! The next time you need a chuckle, a break or just a hearty laugh to get over a bad day at work, start with our list of accounts to follow which will never fail at offering a pick-me-up line or an inspiring message or an uncontrollable attack of laughter!

The good god above makes his voice heard on current affairs and basically what’s wrong with mankind. Armed with satire and sarcasm, this parody account creates awareness and also occasionally drops in quotes and thoughts that makes your day.

2. Vir Das ‏@thevirdas
This man needs no introduction! His tweets are fresh, humorous and make sense. Add in a dash of witty statements and you have a winning set of tweets to keep you entertained. What else are you looking for? Go click that follow button!

3. Faces in Things @FacesPics
Be it the clouds, onions, bags, seats or phone chargers, their imagination has no boundaries when it comes to figuring out a face in everything! 😀
Here is one of their best one! 😛

4. Medieval Reactions @MedievalRxnsIN
Take a modern day scenario and depict it with medieval images! Sounds amazing? That’s exactly what Medieval Reactions’ tweets are all about! They make you visualize a picture in a way that will blow your mind! 😀 Go follow them for some awesome chuckle time! 😀

5. ClassicPics @History_Pics
From the pictures with funniest faces clicked in 1930’s to the New York city in 1950’s, they have it all! They tweet the good, bad, happy and sad historical pictures from the bygone era which will not only entertain and enthral, but also give you warm, fuzzy feelings!

6. Ramesh Srivats @rameshsrivats
His tweets often revolve around current affairs with a pinch of sarcasm and satire. He is a pro at making his point with a sharp sense of humor! Take a bow, Ramesh. 🙂

7. Funny Tweets™ ‏@Lmao
As their Twitter handle says, they will make you laugh out loud with their hilarious tweets! Follow the account and experience it yourself! 😀

8. Word of the Day @thewordoftheday
If you have a penchant for learning & using new words, then this is a must follow account. Word of the day is on a mission to educate people & they tweet a new word every day in English along with its definition, pronunciation and its usage. It can actually help you become a usageaster!

9. Big Ben @big_ben_clock
This went too deep for us! :p
The Big Ben announces time every hour by writing BONGS in its tweets! The theory is as simple as this.The number of BONGS= Time

10. Akshar @AksharPathak
If  you’re having a bad day and need a push to get through it, Akshar’s hilarious tweets are all that you need! 😀

11. VintageBollywoodRxns (Vintage Bollywood Reactions) –  @VintageBollyRxn
If tweets of medieval era was not enough, we have the Bollywood wallas coming in to entertain us with their tweets! The tweets are a combination of old school Bollywood pictures relating it to present day scenarios – with a bang on humor!

12. Pakalu Papito – ‏@pakalupapito
This gem has been winning the internet with his funny, self – deprecating humor for quite some time! His tweets have a minimum of a thousand favorites & RTs! Follow this account for uncontrollable laughter!

14.  9GAG @9GAG
As its bio says, this is your daily dose of awesomeness and happiness! We have been their fan for way too long! 🙂

15. Gabbbar @GabbbarSingh
Gabbar Singh’s tweets will make you laugh and cry at the same time as they are a winning mix of funny and dark humor! 😀

With such interesting accounts, Twitter has been proven to be the most useful way of wasting ~ oops ~ Passing time.
What are your favourite accounts? Share us your thoughts and do let us know if you wish to add any to the list! 🙂