Celebrating Leadership Milestones With a Twist! 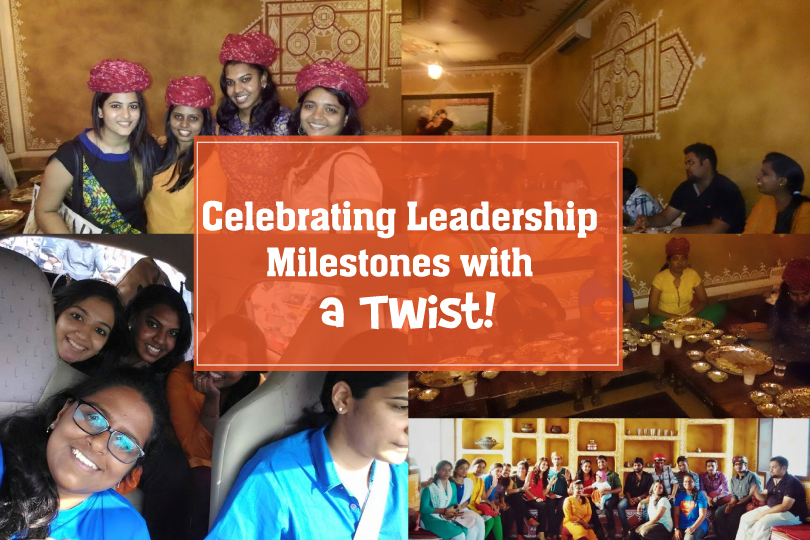 So I went to office on 30th June on a whim – my wonderful colleagues were planning to take the second half of the day off to celebrate the milestone achieved by the team leaders and to celebrate Social Media Day by heading off to Choki Dhani. Since I already had plans, I decided to skip this and just attend office for a few hours but boy, was I so wrong.

Every one of them were in the festive mood and were wrapping up their work early when one of the team leaders, whom I fondly refer to as Malavika ‘akka’ asked me again why I wasn’t tagging along with them. And thus she began brainwashing me to ditch my plans and accompany the team.

But I wasn’t sighing later. I was grinning from ear to ear!

I decided to ride my bike for the 30 odd kms. instead of sitting comfortably in a cab (which showed my decision making skills). I was riding along Pradeep (Graphic Designer) who suddenly decided to ditch me and show off his racing and maneuvering skills in traffic and I had to wander aimlessly searching for Choki Dhani. After what seemed an eternity and an infinite number of U-Turns, I reached the place and almost everyone was waiting for me (with frowns and desi-style head shaking).

An Experience of Rajasthani Culture

We walked in and were immediately transformed to Rajasthan. We were greeted with a tilak by a lovely lady in traditional Rajasthani garb after which we immediately posed for a happy picture in the lobby.

The surroundings were beautifully worked in to showcase the Rajasthani culture and scenario! Among the huts, a serene lady sat cooking Makki ki Roti. It was simply delicious and the roti was made of corn and sprinkled with some of the finest ghee and was served with gudh!

I have never been to Rajasthan nor have I seen anything that closely resembles Rajasthan. And so, after walking just a few steps inside Choki Dhani, I was able to sense an immense difference of the culture.

So we began doing what we do best – posing and clicking with the clay figures which sat happily painted in the huts!
Yes, we did try out this pose 😀

There were a lot of games and activities and I wanted to try every one of them. But abiding by the philosophy of echoVME, I started off with food!

To escape the horror and turmoil of the heat, I grabbed a cup of Jaljeera which rejuvenated me and my quest for more food! The Besan ki Roti which came along with curd and mirchi, offered the perfect blend of sweet and spicy.

The ice gola stalls were luring me with subtle seduction and I had to buy one. I opted for a strawberry flavor and instantly fell in love with it. The Ice Gola also helps you to beat the heat and I was left with an unintentional yet a superb shade of lipstick (which looked better than a Rs.600 Maybelline stick, btw) thanks to the strawberry essence.

My luck at Games

After visiting a lot of other food stalls and of course, Pani Puri, I turned my attention towards games. Trust me when I say this, “don’t brag about your marksmanship skills when you are shooting at Balloons”. After 17 tries and a sore shoulder, I burst 0 balloons exactly.

The one guy who made me open my mouth in awe and wonder was the astrologer. Right from what I am currently doing and to what I am planning to do, the guy got it all right. My mouth, in shock, opened so wide that Nicholas Cage would have fitted the Statue of Liberty inside my mouth with ease!

Sorav had planned a competition for us and after separating us into teams, we were tested against each other on– Social Media Quiz, Pictionary and Ad Zap.
I was sorted in Vishnu Priya’s (Social Media Executive) team along with Pradeep (Graphic Designer) and Karthik (Digital Marketing Head).
In the Social Media Quiz, we were asked to figure out a word from jumbled letters and then list out 10 business benefits of it. Needless to say, the team I was in won the round hands down even though I contributed literally nothing except the motivation!
In the Pictionary round, a person in the team will receive a word and has to enact it so that the others in the team could guess it. This round was won by Malavika’s team but only by a small margin against us!
With us breathing down the neck of Malavika’s team, the entire fate of the competition boiled down to the last round- Ad Zap. Each team received a product and the aim was to create an advertisement along with a tagline. Our team won the round amidst heavy competition. Winning this round also meant that we won the competition!

Since the competition was fierce and tense, echoVME decided to bust some stress by EATING! We headed to the dining hall and I was struck with wonder as to what came next.

I have never been a fan of vegetarian food but the food on offer was exquisite and delicious. The waiters who serve you will literally force you to eat everything and even when you say no, they just won’t budge. The variety of food on offer will impress anyone and includes delicious rotis, pooris, dhal baati, sprout salad, curd rice, palak paneer, bajre ki khichdi, gatte ki subzi, aloo pyaaz ki subzi, butter milk, garlic chutney and etc.

The hospitality that the place offers can never be found anywhere else and the food was simply out of this world. If you happen to eat at Choki Dhani, never say no to their tasty Malpuas. I dunked around 14 of them and was still aching for more!

Everything good has to come to an end. And so, after a crazy and a wonderful evening, we headed out of Choki Dhani with light hearts and strong memories. I was thanking my stars that I decided to cancel the plan with my friend and go to Choki Dhani instead. I was elated to have experienced something truly unique yesterday.

That is, of course, I saw my bike and realized about the 30 kms drive back home!