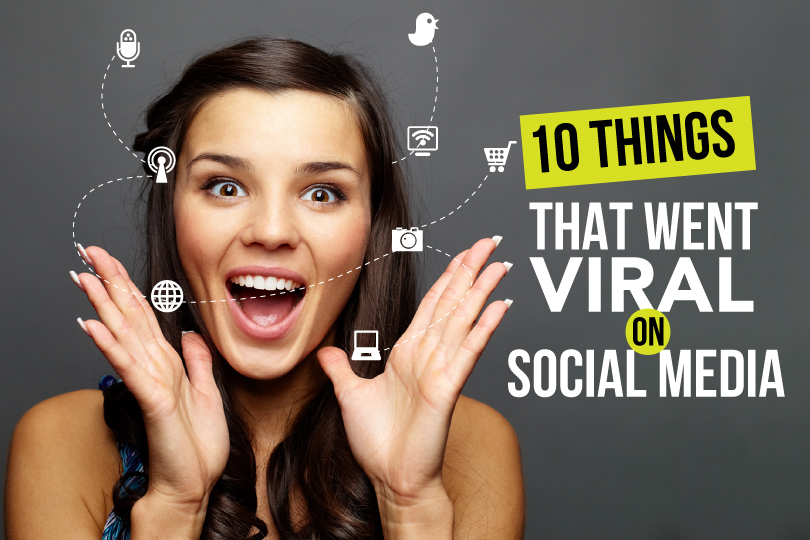 We start our day with Social media and end our day with it. Be it Facebook, Twitter or Instagram – most of us eat, sleep and live social media! Whether it is the morning walk/jog that we go for, breakfast we eat, holidays we go – everything needs to be updated on social media channels. Thanks to the internet, people from all over the world can connect with each other, share and spread information. Everyday, a large amount of content is spewed into the content bank of the internet. Some catch people’s attention and some just fail to make an impression.  Here are 10 things that went viral in the social media scene in recent times.

When Nestle’s Maggi was banned due to the high lead content, it broke the hearts of many and people expressed their sorrow on social media. We witnessed a lot of witty posts and sarcastic comments too.  Here is one from our side which received 123 Likes, 83 Shares. Here is the link: EchoVME The #MaggiBan trended on Twitter for 2 days!

America  legalised gay marriage on June 26th 2015 in all the 50 states and joined 14 other countries to have given legal rights to the LGBT community. Social media platforms showed support in their own way. How? On Facebook, users were given the option to change their profile picture rainbow coloured hue, which is a  symbol of LGBT pride. On Twitter, people tweeting with #LoveWins had a multi colour heart next to the hashtag.

4) Blue and Black or White and Gold?

It all started when a bride posted her mother’s dress on Tumblr asking what colour the dress was. Soon enough, you open Twitter and you see people tweeting with  pictures of a dress asking what the colour of the dress is. #TheDress started trending on Twitter! Facebook  timelines were flooded with “Is this dress Blue and black or White and Gold?”  Various  celebrities and scientists also shared their opinion. Finally people heaved a sigh of relief when they discovered that the colour of the dress depends on the lighting of the room.

5) Scrapping of section 66A

Supreme court quashed section 66A of Information Technology Act, which allowed arrest for posting offensive content on internet. Facebook and Twitter witnessed plenty of witty and sarcastic posts and tweets for the same.

The debate on network neutrality in India gathered public attention after Airtel announced in December 2014 to levy additional charges for making voice calls  from its network using apps like WhatsApp, Skype and other third party apps. Net neutrality is the principle which states that internet service providers and government should treat all data on internet equally. People held long discussions on social media explaining why net neutrality should be continued.

The famous ALS Ice Bucket challenge gained popularity when noted celebrities shared their videos which helped the challenge go viral, mainly on Facebook. People had to pour a bucket of ice water on themselves and challenge 3 other people who could take up the challenge or forego it within 24 hours by donating money. It was done with an intention to collect funds and create awarness about the disease Amyotrophic Lateral Sclerosis and research on it. Noted celebrities, Hollywood actors and CEOs took part in the challenge and played the part in making it go viral!

The video  made by Homi Adjania for Vogue’s Empower campaign starring Deepika Padukone has received 9,737,727  views. The video titled ” My Choice” talks about how it’s up to a woman to live her life on her own terms. It’s her choice to marry or not to marry. It’s her choice to be a size zero or size 15, to marry a man or a woman or both. She is free to do/tell what she desires. While many felt that it was empowering, there were quite a few who took exception for the same! What came next was an explosion of feminist, anti – feminist and all kinds of “ists” wanting to have their own say! A male version of ” My Choice” video was also made as a spoof.  There were positive and negative views about the video being shared over social media. Here is the video : My Choice-Deepika

A roast is an event in which a particular guest is invited and made fun of by his/her peers in front of an audience. AIB roast with Ranveer Singh and Arjun Kapoor became an instant hit. The video went viral all over social media. It had millions of views on the internet and was discussed & debated on television. People shared positive and negative feedback for the same. Two hashtags were trending on Twitter  ‘#WeStandforAIB’ and ‘#AIBNationalShame.’ The troop fell into major trouble as they came in the lime light of  politicians and a joint FIR was lodged against actors Arjun Kapoor and Ranveer Singh!

Je suis Charlie or “I am Charlie” was the slogan adopted by people in support of freedom of speech where 12 people were killed in the office of the French satirical weekly newspaper Charlie Hebdo. Supporters spoke out on behalf of the victims, expressing their opinions on social media. Millions of tweets and thousands of pictures were posted on Facebook, Twitter and Instagram respectively. #JeSuisCharlie trended on twitter.

Thank you for reading the blog. These were our favourite picks! Which one was yours?