Top 10 Kollywood Celebrities On Twitter – An Analysis by echoVME! 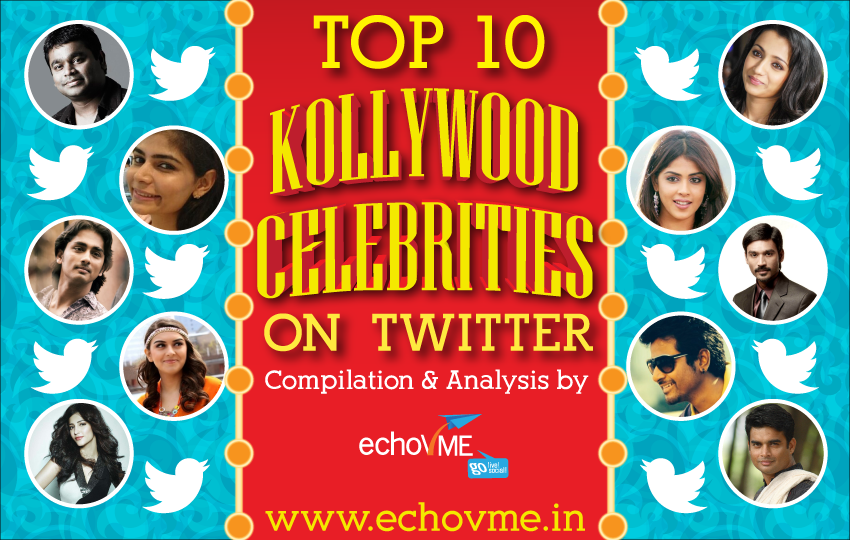 Our very own Kollywood celebrities have quite a special relationship with their followers. With regular updates when it comes to their upcoming projects or behind the scenes or their personal lives, our celebrities are addicted to the micro blogging site and to their fans. Let’s take a look at the top celebrities on Twitter and their social authority:

A.R.Rahman has been included in the most influential celebrity in the world and is being followed by 4 million followers on Twitter which is the most by any other celebrity in kollywood. He is most loyal to his followers and posts periodical updates on his music and behind the scenes. He also has his official Facebook page integrated with his Twitter account which automatically posts from Facebook as well.

The beautiful Genelia will always remain a Kollywood girl, her Twitter activities shows that. Being an active tweeter, Genelia ardently posts about her life and interacts with her fans alongside of promoting her husband, Ritesh Deshmukh’s film promotions as well. She also proves to be a dutiful citizen and tweets about electoral roll registrations for Maharashtra!

Actively promoting her projects, the famous starlet of Kamal Haasan tweets her way through the day and also with constant Instagram updates. With 1.38 Million followers, she also retweets her fan club’s tweets!

Right from his profile picture, actor Siddharth is involved in actively promoting his projects. He also tweets about world issues, showing his support and tweets about his life and interacts with fans by retweeting often. Having 1.17 Million fans, he makes upto 4 to 5 tweets a day!

Trisha continues her charm on Twitter as well and recently crossed 1 million followers(updated). She retweets the tweets she is mentioned in and actively engages with her fans and tweets about her personal views and her periodical updates on her upcoming projects. She thus has a social authority of 71!

His feed might be filled with retweets but once you see what they are, you will be overwhelmed. Showing his complete support for his cousin in the music industry, Anirudh Ravichander, Dhanush actively retweets every tweet complimenting his cousin’s music for the music director’s recent victory on the movie, Kaththi, barring all his personal tweets. True to his unconventional ways, Dhanush continues to show his support for his coworkers and has tweeted about Vikram’s ‘I’ as well. With 972k followers, Dhanush’s social authority stands at 82!

Sticking to conversing with fellow actors and fans on Twitter, Madhavan ardently involves himself in conversations with fans, answers their questions and retweets almost every tweet he is mentioned in, humbling his fans. He makes 2 to 3 tweets a day, with a follower base of 783k followers and stands at social authority of 72.

She took Twitter by storm when she announced her relationship with STR a year back, showing her seriousness and transparency on her social media channels. The young actress continues this streak by continually updating about her fun on sets with her co stars, retweeting tweets about her, the reviews about her recent movie Aranmanai! With 746k, Hansika’s social authority stands at 76!

Bringing his humility on social media as well, the amazing Sivakarthikeyan is an ardent tweeter and

The timing humor which he does on screen is done on twitter too. an active actor on twitter with his tweets , promotes his and other co-stars movies for his fans to stay updated! he has 507k followers and makes sure he does 4 to 5 tweets a day.

Chinmayi is yet another Kollywood celebrity who revealed her relationship with actor Rahul Ravindran on Twitter. With upto 10 tweets per day, the charming voice artist and singer actively tweets about her music videos and upcoming tracks to an awesome and well receiving audience. She also regularly updates about her personal life and is quite an influencer in the Twitter scenario. With a follower base of 312k, her social authority stands at 78.

The statistics taken are as of September 15th. An Analysis by echoVME Digital and Leading Digital marketing company in Chennai!