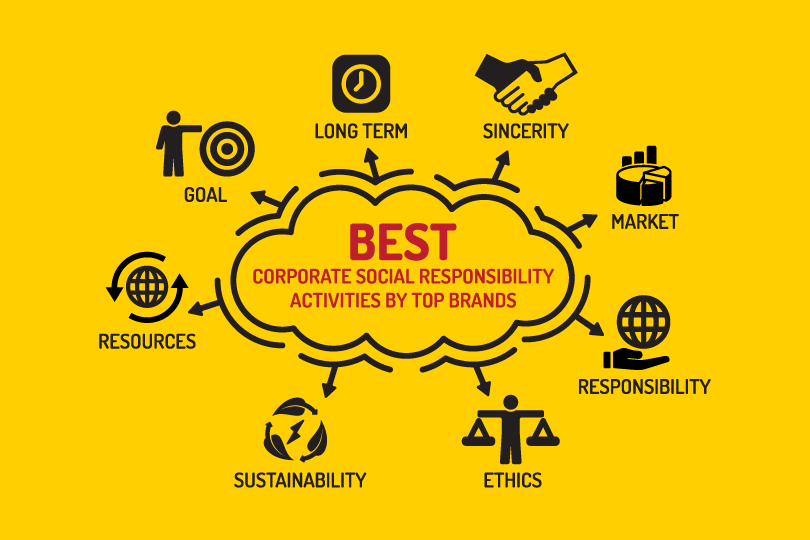 Now we are going to learn a little bit about Corporate Social Responsibility or CSR. Now this may sound strange to the ones out there that don’t have a large company or the people in start-up companies. Make no mistake though that this is an important topic to think about as this is something that applies to all companies be it large or small. Regardless of their size, each company is a brand and these brands must continue to uphold or elevate their reputation in the eyes of the public. For them to do that, they need to know about CSR which is what we are going to talk about right now.

Without waiting too long time we get started on the basic stuff which is the definition.

Corporate Social Responsibility or CSR is a corporation’s initiative to assess and take responsibility for the company’s effects on environmental and social wellbeing.

Corporate Social Responsibility or  CSR is the continuing commitment by business to behave ethically and contribute to the economic development while improving the quality of life of the workforce and their families as well as that of the local community and society at large.

Basically this means “good company, good people, good environment.” No one wants to work for a company that pollutes the environment around them, puts the workforce in difficulty working conditions. So companies have the responsibility to ensure that they only contribute to the betterment and not the detriment.

Now that we got a good idea about what it is its time to ask the next big question, Why is it important? I know that we all understood the importance that CSR has by the definition alone but it is always important to gain a little more clarity on the subject.

With issues such as environmental damage, improper treatment of workers and production that leads to danger to the customers Corporate Social Responsibility is becoming more and more important. For example, imagine a company that does only good. They create the best environment for the workers and give them everything that they need to get the job done. They even adopt a few environmental policies that help reduce their carbon footprint and organize a couple of charities and food drives to help the weak and destitute.

Now anyone can see that that is a great company and of course people are going to want to work there and who wouldn’t? If you felt like you were working for a company that cared about you and the world you live in won’t that motivate you to do better?

There are also a few stats about how important Corporate Social Responsibility is and how much companies pay attention to their reputation.

To help you out a little further, here are the top reasons why companies rely and adopt CSR strategies.

Now that we have learned a little bit more about CSR the next big topic that I am sure you want to know about is the companies that perform CSR activities. Its great to talk about it in theory but if big companies don’t adopt any CSR methods then why should a small company do it? Not to worry because we have a list of companies that does a lot of CSR and as a result, has a very firm reputation on an international basis.

5 Companies that use CSR activities

In case some of you are unfamiliar with the brand, Starbucks is like Café Coffee day but much much bigger. The company has been in existence for more than a couple of decades. From the get go, it has always strive to operate and conduct itself in an ethical manner. In Fortune’s Magazine the company is ranked as the fifth most socially responsible company in 2012 (and that is a tough list to crack). There are a lot of reasons for high ranking like how the company looks for better ways to develop sustainable production of the coffee. Starbucks have a few guidelines in place called the C.A.F.E practices which are to ensure environmental leadership, product quality and economic accountability. The company also supports Ethos Water which is another company that is known to provide clean water for more than a billion people.

You know it, you love it and you’ve watched a few movies of it at least once in your life. The super company that has been around since you grandfather was a kid still has a sparkling reputation. Walt Disney company focuses primarily on the community, the environment and volunteerism aspects of CSR. They were instrumental in providing aid after the 2010 earthquake that hit Haiti. The company is also known for protecting the environment, giving proceeds from nature films to plants trees in the rain forest and protects thousands of acres of coral reef.

Now this is a personal care company that has a big focus on helping communities around the world. One of their more well known and major initiatives is called Nourish the Children. The program began in 2002 and it lets company sales leaders, employees and customers to donate nutrient-rich meals to needy children. As of March 2014 the company announced that it had surpassed 350 million donated meals. The company also operates the force for good foundation which works to offer children relief from illiteracy, poverty and disease.

I’ll bet you’re reading this article on a windows computer right now. The company behind one of the biggest operating software in existence is also a company that takes a great effort in giving back. The company was named as the best at CSR by the reputation institute. One way that Microsoft helps out is through their annual employee giving campaign, where the employees attend fundraising events that help out nonprofit organizations. The campaign has been held since 1983 and has raised more than a billion dollars in contributions which has helped more than 31,000 organisations.

Granted, it’s not as big as the other giants on this list but nevertheless, the charity work done by this company has earned it a place on this list. The entire company was founded with the idea of giving back. For every pair of shoes that are sold, another pair is donated to a child in need. More than ten million pair of shoes is donated and that effort has now extended to vision care for the kids. This company is not all about the bottom line, they strive to be a caring part of the community and help those who are in less fortunate circumstances.

At the end of the end its about how much the company gives back to the world around them. People like that, people want to be part of that and people help when companies do CSR activities. So there you have it, all you need to know about CSR and some of the top companies that are known for their CSR practices.

To able to have a successful company they must have Corporate Social Responsibility or CSR which give them initiative to assess and they can think more to improve the business as well as the welfare of their people.

Thankfulness to my father who shared with me regarding this blog,
this website is really awesome.