Discover How Wilbur Sargunaraj Became a Superstar on Social Media – The Power of Personal Branding! 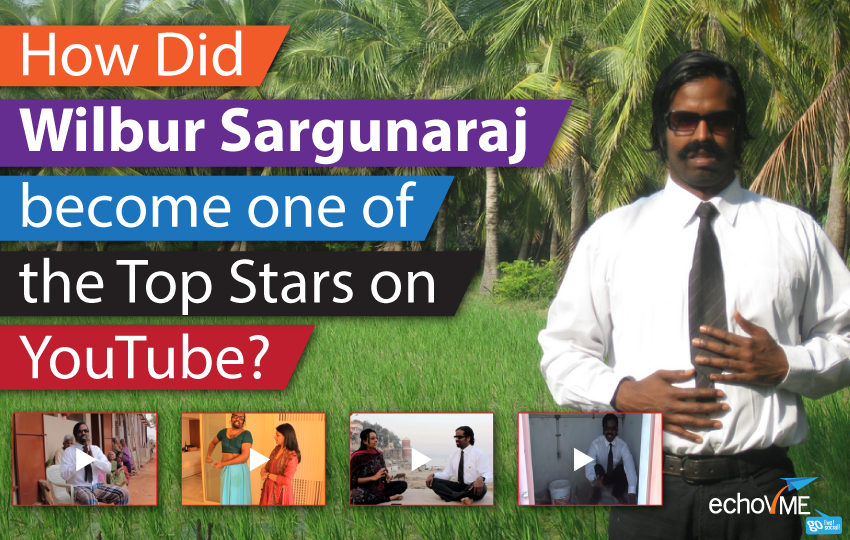 As per Wikipedia’s stats, Wilbur Sargunaraj who hails from Madurai, Tamil Nadu is widely known as India’s first YouTube sensation with nearly 5.5 million views to his YouTube Channel. He has 160 music and instructional videos uploaded from two different albums “Wilbur Sargunaraj” and “Simple Superstar” to his credit. Some of his videos showing a common man’s feeling such as singing to “Mummy, Daddy”, that he wants “the Love Marriage” has gone extremely popular on the web. Sargunaraj has also been touring the world with an aim of “making the common man extra-ordinary.”

In this excerpt from Sorav Jain’s book “Social Media for Business: Stories of Indian Brands” read Wilbur’s interview to understand how social media has helped showcase his talent across the world and made him a globally renowned personal brand.

Sorav: Which was the first video that went popular and how many videos have been produced since then?

Wilbur: The first video that went popular was the Blog Song, a satirical music video on Blogs. I did not start entertaining people at the beginning of all the social media hype. I loved performing and had been doing it for a while…the old-fashioned way of networking and performing in person. Performing and touring was the “YouTube” of the past, something I loved and did often. Now to get your music heard, all you have to do is upload it, Tweet it, and Facebook it, etc.!

Around 160 videos have been produced till then, however that’s since YouTube came along. I can’t count how many performances I’ve done since I was a little boy!

Sorav: How did social media help you?

Wilbur: Social media played a great part in rallying the community of Wilbur World Wide so I didn’t have to travel from city to city to get my music heard! It’s being adjustable and malleable. Changing with the times and using technology to its greatest capacity to get your message and art out into the world has benefitted me!

Sorav: Which social media platforms has benefitted you the most and how?

Wilbur: I have a personal blog and a Twitter account, but I am still exploring its potential and believe I will soon use them more extensively. Facebook is the platform I use the most and I have my Twitter account linked to it as well. Facebook really is a first class platform where I have found the most success in social media. Maybe I like it because I’m not limited to a certain character amount like in Twitter and there is more of a relational and community aspect to it. The ability to showcase photos, music, and being able to highlight links and content is really superb.

“YouTube,” I must say has revolutionized the way we perform as independent artists! How else can we get our music videos out there? No big record labels or music TV channels are going to approach the common person so having YouTube to get my content out is priceless in this day and age.

Sorav: If I have to ask you pick one social media platform that has worked most for you, which one it would be?

Wilbur: I believe that all social media platforms work hand in hand. Some could argue that YouTube would be the most that could benefit you but if you take Facebook away from YouTube, I find you lose a good chunk of your following. Twitter is so hot in India now and a friend of mine in the film industry said that people are gauged by the amount of Twitter followers they have! This is all very fascinating for me as I come from the era of tapes! Yes I know that dates me!!!

Sorav: How much credit do you give to social media for your success?

Wilbur: I totally give social media the credit, but there is a balance! As I said in an interview on BBC radio last year, “social media and technology is just a way that brings me face to face with my fan base and allows me to develop community.” I have been able to travel around the world and meet with the Wilbur World Wide community because of social media! I’ve had some amazing conversations on Facebook with fans who have gone through hard times and just want someone to talk or listen to! I was even encouraged by a fan from Calcutta when I was going through a serious sickness last year.

Sorav: Any message to young India?

Wilbur: Social media is important but do not get addicted to it. Technology in this day and age can be abused. Think about it! If you are on the internet all day and not developing face-to-face relationships, look what you are missing out on! We were created as relational human beings! We were meant to be in community! How many people miss out on the moment while they are at a concert or special event…“I have to take a picture of this and tweet it”….and you know what happens…they miss experiencing that moment! How many thousands in the stands missed seeing Usain Bolt cross the finish line in 9.6 some seconds because their heads were down on their mobile phones or gadgets! They missed the moment! We truly have become the culture of “I” Me! Me! Me! Look at me! Are we self promoting the trivial these days?

Social Media: Stories of Indian Brands by industrial expert Sorav Jain takes you through thoughts, illustrations, examples and proven models to go beyond just the realization. The author effortlessly illustrates his Social Media philosophies by giving a insider’s view of the challenges and opportunities for Indian brands to turn to authentic execution of branding in Social Media – the phenomenon that has already delved deep into the Indian fabric. This book will help you learn how Social Media can be perceived from different aspects of business. This book is filled with case studies of Apollo Dental, Levista coffee tips and perspectives on how social media is a virtual world that provides various business opportunities apart from regular business networking.