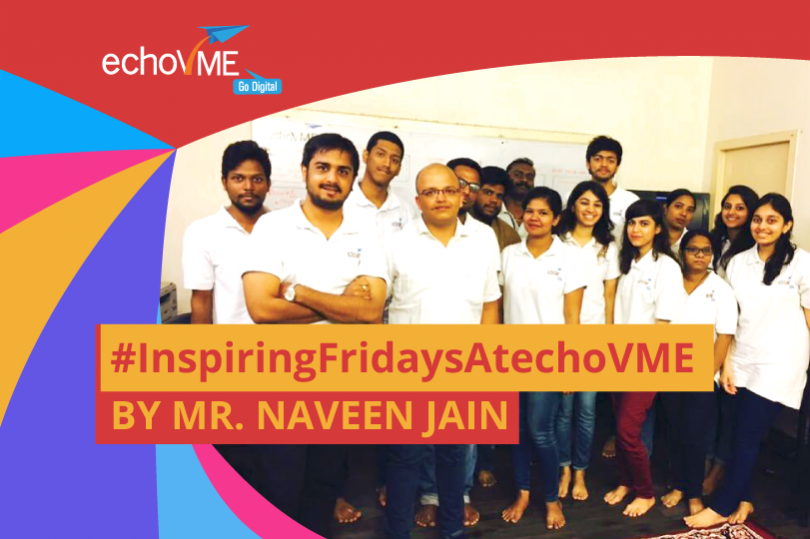 On a smoggy Friday morning at echoVME, Mr. Naveen Jain showed up all set to inspire us. A man with a six sigma black belt around his waist and with over 8 years of work experience as a transition analyst with top businesses used the words recycle, statistics and numbers often. He has also trained many students on soft skills at many engineering colleges across Tamil Nadu.

While we were wondering what he is going to talk about, He handed over some sheets of paper to us which had some random numbers spread across. There were six sheets of paper each with numbers inscribed on it. He asked us to cross out numbers in sequence from 1, 2, 3….49 on the first sheet which consisted of numbers 1, 2, 3…..99 in an un-orderly fashion, giving us a time interval of 20 seconds. We were like “Dude, how’s it even possible?” but then we tried and ended up crossing only 3 or 5 numbers in sequence given the less time interval adding to that the way in which the numbers were presented to us.

He enquired us on what went wrong and why we were unable to complete the task. He added that this is going to change in a few minutes and that we will be able to see the bigger picture pretty soon. Similarly the other sheets of papers had similar tasks and a hidden agenda behind it. But in the process we were able to sort the numbers when the task and the order of numbers were clear to us.

While we were wondering why we were given these tasks, he unveiled the concept “Lean” and how big automobile manufacturers like ford and Toyota employ it to remove waste and improve their organizational productivity.  He also abbreviated “TIMWOODS” which are the 8 different types of waste every organization should remove to improve their productivity, namely,

This made us realise how often we waste time in searching for things we misplace at work, be it a work file, a stapler, or a particular file in our computer. If we had removed the unnecessary items and kept things where they can be accessed easily it would have made our job pretty easy and stress-free.

Just as we started realising how much time we had been wasting, he introduced yet another topic alien to us – “The 5S Matrix”. It was pretty obvious to us that it was 5 words each starting with the letter ‘S’. It seemed to be a Japanese based workplace organization method containing of 5 words, namely,

These 5 principles if properly followed will guarantee to improve the workplace productivity of any organization.

He ended the session by stressing that “5S is not a one-time exercise, it must be followed on a continuous basis to sustain and reap benefits out of it”

One of the finest writing I have read so far!