Hurray! We Have Our Social Media Heroes! 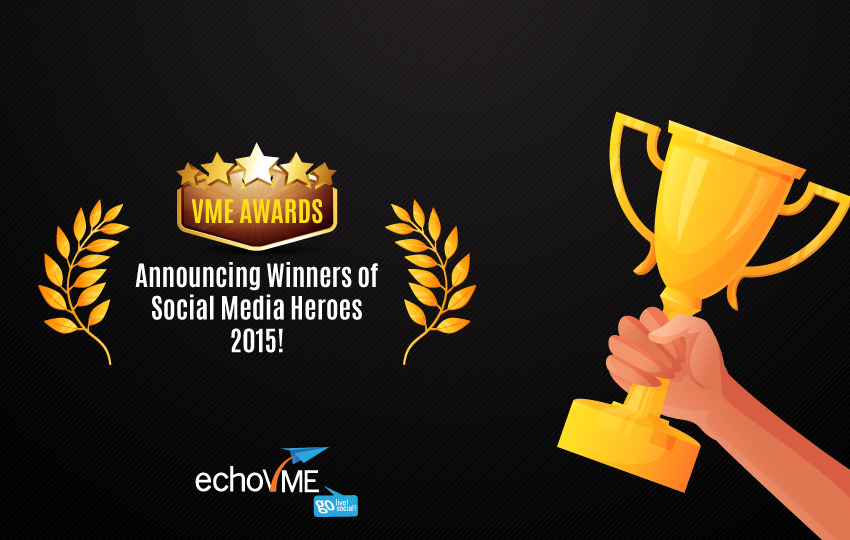 What with the internet being filled with content, it is becoming more & more difficult to make your own mark in the digital marketing diaspora! We once worshiped our favorite heroes, literary geniuses and sports stars. Social Media is no more a thing, but a massive industry with its own heroes.

Social Media Super Star awards celebrates the best entrepreneurs who used and still use Social Media to take their business to the next level. When it comes to self made celebrities, the following have achieved success through time, patience, hard work and their inspirational ideas on social media. We are very happy to honor them! Ladies & Gentlemen! Here are the winners line-up for echoVME’s Social Media Super Star Awards:

1. Lakshmi Rebecca – A filmmaker and an anchor she is the founder of Red Bangle, a film production house. She hosts an award-winning talk show ‘Chai With Lakshmi’ featuring people and ideas positively shaping India for the future on her YouTube channel.

2. Siddharth Salthia–A singer who started his journey as a YouTuber, Siddharth started singing a few songs & uploading his videos on YouTube. Things turned up when he started putting up tutorials for singing! Siddharth has also coached the upcoming singers in the Indian Idol academy.

3. Tinu Cherian – A popular Wikipedia administrator, who has over 52,000+ edits on en.wikipedia making him one of the top 100 article creators, top 300 global editors and one of the top 4 Wikipedia editors from India or Indian origin by his number of edits.

5. Malini Agarwal – Malini Agarwal, a.k.a. MissMalini is India’s first and most famous celebrity blogger. She founded her blog MissMalini.com in 2008 and as described by The Huffington Post, “Agarwal and her team cover everything that is hot.”

6. Enna Da Rascalas – A team of four who aim at throwing some light and educating Indians on the real facts about the India that exists down south via YouTube. Their recent video, South of India was an instant hit and went on to become one of the most viral videos of the south, garnering 1,501,237 views!

7. Alicia Souza – A modern humorist and an illustator who loves doodling about daily chores, dogs and other funny things. She believes in being happy all the time and has a large number of followers on Facebook, Twitter and her blog.

8. Akshar Pathak – Pathak’s minimalistic take on classic movies led him to create the iconic “Minimal Bollywood Posters” on Facebook. His love for minimal designs through graphic designs was widely appreciated when his posters went viral, putting him into the Social Media limelight. He now has a whooping 2 lakh+ audience on his page!

Congratulations to all the winners! You all have done the Digital Media world proud to a great extent!