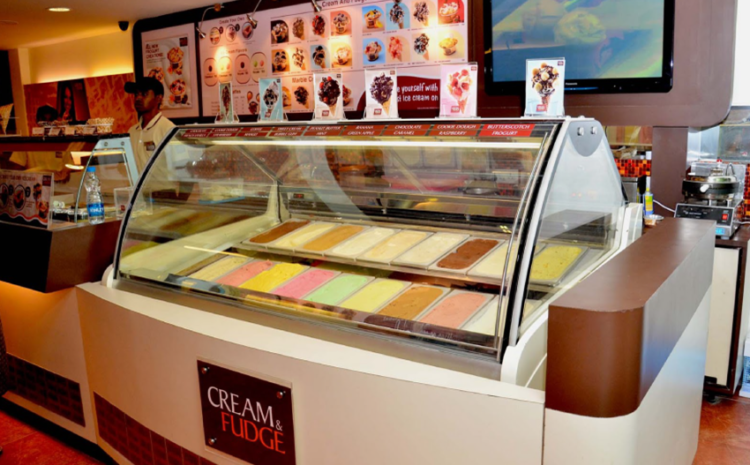 The first good thing you would have to say about the brand is it’s pretty darn good is the extensive marketing that cream & fudge has taken up.

Being a big time ice cream fan though, I didn’t really require that amount of convincing to check out the newest and most talked about ice cream haunt in the city.

So with the actual intention of wanting to taste those delicious icream cones staring at me a pamphlet, I devilishly suggest that we immediately review the place.

Its around 7p.m. on a Thursday already and it’s not that long before Sorav , Priya and I are smoothly cruising along toward Khader Nawaz Khan Road, Chennai.

The cheerful little corner seems like a chunk out of a dream as we quickly dismount and hurry inside to ice-cream haven.

Each delicious recipe is thrilling and enchanting as we’re mesmerized by BRUCE LEE behind the cold stone – with what seems to be a technique from the famous ‘Rumble in the Bronx’ movie.

Sorav goes with blackforest in a cone and Priya opts for the Strawberry Fantasy in a cup. I go through the menu and order a chocolate truffle Sensation in a cone as well.

Our orders arrive and we’re almost drooling on our counter. Somehow I’m grieving the look of the hot chocolate caramel sauce on Sorav’s Black Forest combo; proble fixed! – with a few puppy dog whimpers and a batter of the eyelashes, I too have the delicious add on for free! (Girls do try this.. Boys, I’d rather not venture here).

The first bite out of our cones and there aren’t enough of ‘hmmmmmmm….s’ to fit into 1 sentence. I don’t know if it was the suspense or the hype, but this was one of the best ice cream’s I’ve tasted yet!

Only priya isn’t too convinced with her strawberry fantasy. My advice- Go for it waith a waffle cone or cup. It just isn’t the same without it. Try the choco varieties. You’re bound to go head over heels even if you aren’t a choco lover. Experiment experiment experiment. There’s no other way you could find that right cold stone mix for you!

As I’m walking through the door with the very last bit of a choco stuffed cone –ending, I notice a group of boys looking intensely at the ice-cream 9or whtever is remaining of it). I quickly gobble up the last piece and give out one last hmmmmm. “Chocolate it is” , says the crowd. Lol! Mission accomplished.

The Bad & the Ugly

Let’s talk – lonngggg crowded lines. Its one thing that there’s a huge demand for ice-cream but a whole other ball game when you’re actually made to line up way outside the parlour! All good things come to those who wait? I sure did hope so as I stood at the end of the long boring line convincing myself over and over that I was just a few feet away from the ice cream of my dreams. (I’m not usually patient for this type of thing).

It’s lucky I have Sorav and Priya to keep me engaged in choosing the menu. It seemed like we would really have to debate about this awhile.

We reach finally reach heaven’s gates and realize it was a waste to even make up our minds. It seems that the Cookie Dough ice-cream was still packing its bags on the way to India. Sheesh so much for the debate!

Cream & Fudge – We would like to inform you that if you were to spend every penny possible on marketing your campaign right out of every dungeon, it would be better if you had all ice creams available at first.

I look around and see that the place is decorated pretty ok with ice-creams everywhere. But can’t seem to overlook the hideous fake green plantation in the sitting area. Vaastu, I say. Sorav says, ‘Must have been decided at gunpoint!’. LOL! I agree totally.

My order placed, I’m branded with a jailer’s number for my coupon and wait feverishly for it to be called out ‘ON AIR’. Seriously people – haven’t you heard about personalized service. Jail number callouts are so passé. Cream & Fudge really have to adapt.

The last and final thing I noticed as we walked out pretty content though was the lazy watchman watching us click photos of the us in the place right under the ‘NO PHOTOGRAPHS’ sign. SAY CHEESE people! Hehehe.