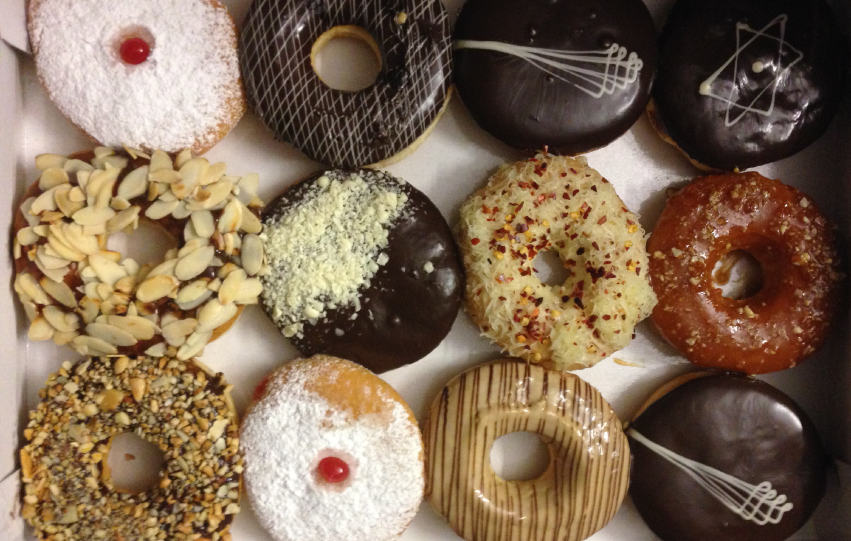 Donut House, Chennai’s first exclusive doughnut shop was recently launched with much fanfare. Located at the heart of the city, Chennai can now boast of having a doughnut house in Wellington Plaza near Ethiraj College. It is being promoted by Pandora Foods. Walk by the place and you’re immediately tempted to peer through their see-through glass windows and take a peek at the options available.

The ambience is pretty much a peppy fast-food outlet with a live kitchen and huge luxury cafe space. Customers at doughnut house are allowed to witness the making hot, fresh and delicious doughnuts. Imagine that! More like you’re definitely gonna eat one even if you’re not in the mood. Even the smell of the place adds to the donutty ambience. You are immediately transported into the donut world. You can see donuts hear donut, speak donut, smell donut. A pure experiential marketing. – I say YUM!  And it seems that the only thing missing would be seats made of donuts so you could sit on them as well! J

A Great snack at great value for money

Donut house has two varieties of donuts – a glazed type which are the plainer looking ones which are priced at Rs.39 per piece and the second would be an assorted, exotic variety which costs Rs. 45 for a single. Now, would you be ready to stop at just one? I don’t think so! And the occasional understanding is that you might end up spending a little over a hundred bucks after all to try out their varieties.

Hurray for all you vegetarians!

It’s a common misunderstanding for many who think that donuts are made with eggs. Well, it’s a pretty common fact that all doughnuts of donuts are eggless.  Well even if all of them aren’t , They’re eggless at donut house!!! The recipes of the donuts are indigenous making them light, fluffy, oil-free (well the is only a post production attribute lol!)  and not overtly sweet.

Having heard so much hype about donut house, we entered there with high expectation – only to be greeted by Chennai’s very own dear friend – power outage!

Waiting for them were a short-lived suspense and the donuts that arrived really lived up to the hype, transporting us to a world of sheer indulgence. The doughnuts were soft supple and incredibly yummy.  Our personal favourite was the chocolatey donut ( I may be biased) which was an absolute delight and would probably draw us back to this place time and again.

To find your pick, we suggest – definitely try them – Donuts J