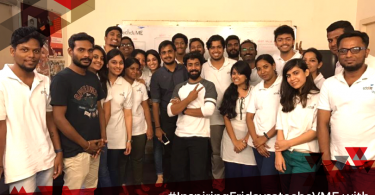 echoVME was in dire need of fun this week, which resulted in Mr. Abhishek Joseph George, a budding actor from the Tamil film industry showing up with a down to earth attitude.

He began to introduce himself as an engineer who started his career in the advertising space. But found out later that his DNA is acting and started to follow his dream of becoming an actor in the Tamil film industry. So far, he has acted in two Tamil films – Demonte Colony and Adhey Kangal in a supporting role.  After introducing himself he asked each of our echoVMEans their name and one thing they’re really proud of. Guess he wanted to get acquainted with us on a personal level.

Since he started his acting career as a theatre artist, he utters the word ‘emotions’ often and how one can use it to own the audience in a theatre. He passionately quoted “When you’re on stage you’ve to beware of your surrounding and supporting actors”. Two of our very own echoVMEans are theatre artists themselves so the session got even more interesting with each of them sharing their own personal experience in acting and how it impacted their life.

Abhishek took the session to a whole new level when he said “Alright! Enough talk, lets act”. He split us into four groups and randomly pointed each one of us to come up on stage and exhibit an emotion of the team’s choice. We echoVMEans couldn’t control our laugh but as the workshop on acting went on; the session started to get even interesting and got our full attention.

He further asked us to do a freeze act as a team. Each team started their act with one member doing a random action and then others supporting the act and completing the act.

In between all the lights-camera-action, Abhishek taught us all the key things to keep in mind while acting in a play and how to not bore the audience rather keep them in sync with the actors.

We successfully pulled off the act while enjoying every bit of the session. The session was so interesting that we even forgot to have our lunch that afternoon. Abhishek concluded his session wishing us the best of endeavours. We collectively agreed that this session was one of the best that we’ve had and needed more like these.

And that was all from the fun-filled Friday at EchoVME.