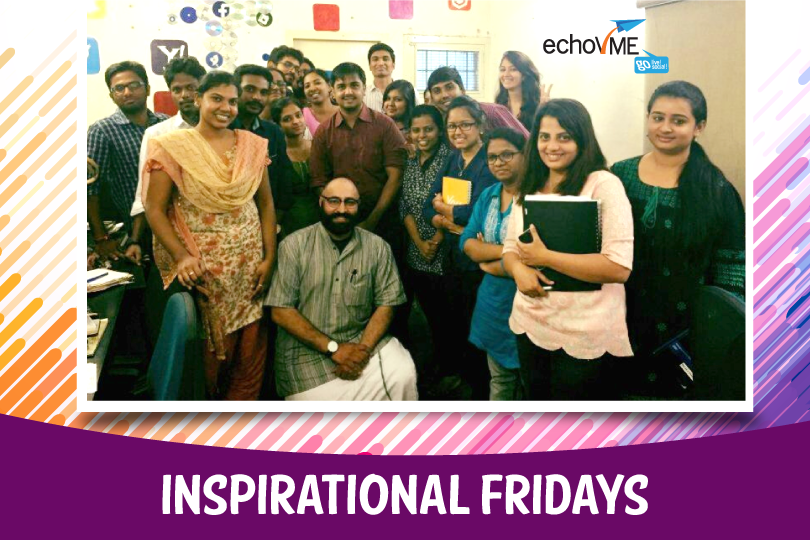 Remember how Kiruba introduced the stories of two inspiring & famous souls who had a very close encounter with death and that experience changed their lives?

One of those ‘Whacko’ persons, Pravin Shekar  happened to visit us for an inspiring Friday session today! What more could we ask for to give a kickass end to our weekend?

Pravin Shekar – A man with multiple talents, a startup specialist, an entrepreneur, research evangelist, runner, cyclist and above all a wonderful person! He heads an organization called ‘Krea’. He has also been heading an organization to explore the talent of the physically challenged and make them independent!

His Theories of Life:

He began his session talking about how he was inspired by the phenomenal strategy that he witnessed on his journey in a war zone! He continued saying that no idea is wrong, it’s only how you execute it is what matters! His crazy approach towards life is formed out of five crazier named theories!

‘Invite ideas first and start rejecting later’ is the motto of this theory! It’s human tendency to think about the not-so-positive side of an idea the minute it strikes your mind. Don’t you agree? We did! To which he answered saying that we should remove all the inhibitions from mind while wearing our ideation hats!

‘Go ahead and pitch it!’ were his first words when he began introducing this concept! No matter how bad people think your idea is, there is absolutely no harm in trying it out! It’s a win-win situation always, you either win or you learn!

The fatter your book gets, the better your mind gets! Didn’t get us?

Be it a movie or a conference, Pravin never fails to carry his evernote along just to write up ideas in case something inspires him during that period! From the punch lines in the movies to catch phrases by speakers in conferences, he makes notes of literally everything!

We have all decided to carry forward this theory of his for the rest of our lives!

What’s the whole point of experimenting if you don’t know what results did it bring? Right?
So that’s his fourth theory- ‘The Stats’! Measuring the outcome of your ‘Whacko” idea is absolutely important!

What/who is that you are working towards? This is what forms your ‘THAT’!

His session was peppered with a number of awesome quotes and one among them was
‘Never Fear Failures!’
He continued saying, ‘Get out of that 4/4 culture (it’s the Kollywood version of ‘Log Kya Kahenge’:p) because at the end of the day, log won’t come to save you when you have a crisis. You are the only person who can save yourself!’

When asked what his whackiest idea was, he told us about his experience where he was the ‘TOILET SPONSOR’ of the event! Sounds super crazy right? 😉 Yet it worked in his favour and he had about 11 clients signing with him on that very day!

Another wildest idea was putting up a huge board of the reception of a prospect client showing an infographic about the current position of the client and the future possibilities because he believes that ‘Marketing is all about grabbing attention, retaining it and converting it into sales!’

Though he has failed sometimes, he has never stopped trying because learning is the core of humanity and that’s what inspires us the most about him!